WaterCAN’s “What am I drinking?” survey finds only 37% routinely trust the quality of their drinking water

WaterCAN, an initiative of the Organisation Undoing Tax Abuse (OUTA), recently conducted an online survey to find out whether South Africans trust the water coming from their taps. The online survey is telling as it reflects the findings of government’s Blue Drop and Green Drop reports and a few hidden surprises too.

WaterCAN received 1 291 responses to the survey, with most from Gauteng and the Western Cape and the least responses from the Northern Cape. The chart below shows the percentage of responses from each province. 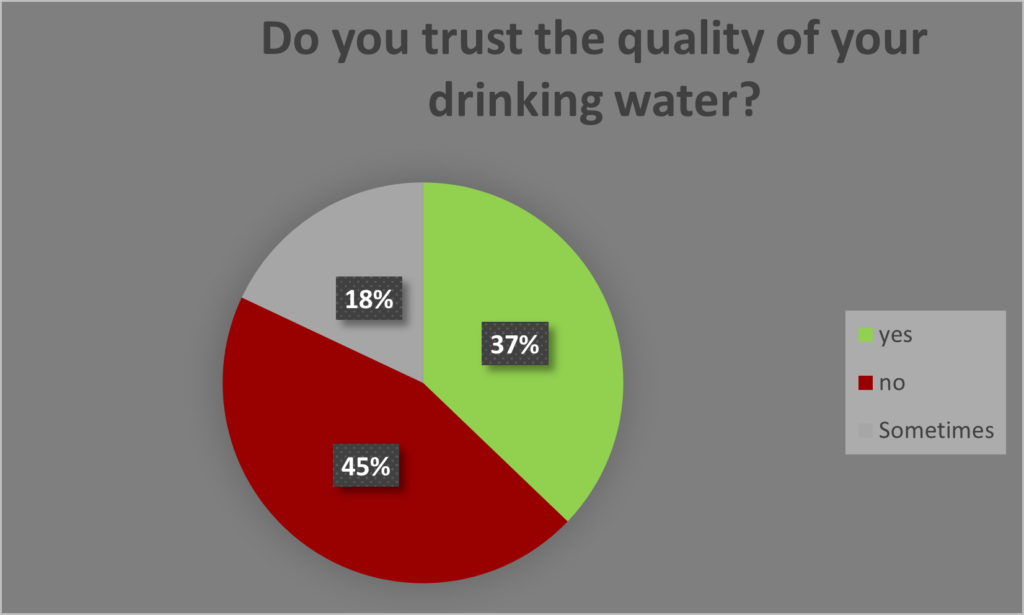 The many reasons for people’s distrust are not surprising but reflect a lack of information provided by municipalities across the country. In general, the responses received fall under four main themes of observations, chemical concerns, bacterial concerns, and management of water resources. Under these themes, the key reasons for not trusting the quality of drinking water included water having a bad smell or taste, a sense that there was too much chlorine, or water which looked murky or muddy. A number of respondents mentioned people falling ill after drinking the water and also suggested that this could be due to high levels of E.coli. Many felt that the poor state of water was due to inefficient municipalities, dysfunctional wastewater treatment plants and poor infrastructure.

Two responses stand out, with one respondent reporting recently finding tadpoles in the tap water, indicating a failing water system. The other response reflects people’s frustration and lack of trust in government, commenting that “the municipal councillors and staff drink bottled water in their meetings while they claim that the water they supplied to communities is clean but they don’t drink tap water”.

“The responses we received are an indication that people are clearly fed up with local government’s inability to meet basic services and to provide clean and safe drinking water. Government’s lack of communication and information on the quality of our drinking water exacerbates people’s frustration. Through WaterCAN, we are building a network of citizen science activists to become water guardians and stewards to monitor and be empowered to better understand their water rights,” says Dr Ferrial Adam, WaterCAN manager.

The municipalities that had a combination of poor quality water as well as the most number of days without water (more than nine days a year) have been identified as hotspot areas and include the following:

The majority of the respondents who were happy with their water were in Johannesburg or Cape Town, with specific mention of the reliability of the services of Rand Water bulk water utility, which supplies a number of municipalities, and the City of Cape Town. Other positive responses were from people who had borehole water, filter their tap water, use rain water harvesting and thus are not reliant on municipal water.

The survey is telling but it is not a surprise. The results are in line with what we have seen in the Green and Blue Drop reports of failing water quality and wastewater treatment across the country. In a country that has 39% of municipal wastewater systems in a critical condition and 77% of water supply systems failing to meet legal standards and limits, residents are entitled to expect more warnings and notices from municipalities on the quality of the drinking water.

Much greater transparency is needed on the quality of drinking water.

We demand that each municipality publicly announces the results of water quality assessments, so the public can use this information to pressurise municipalities to improve the quality of water as everyone has the right to clean drinking water.

What needs to be done?
• Citizen science to build activism
• Hold municipalities accountable
• Transform voices into action
• Demand open and transparent data and information from municipalities

WaterCAN believes that through the citizen science network we can build a collective voice on water that is loud and forceful enough to effect change.

No comments to show.